Pat Gilligan (pictured above, right) is the Executive Vice President of Sales, Marketing and Product for Blue Cross Blue Shield of Massachusetts, the largest private health plan in Massachusetts and one of the largest independent, not-for-profit Blue Cross Blue Shield plans in the country.  With that kind of responsibility, you might assume he wouldn’t have time to take on a major philanthropic relationship. You don’t know Pat.

“I believe that to the extent you can help, you should,” he said in a recent conversation.  “I think when you give, you give your time, talent and treasure, and my talent is business. That’s why, in addition to my donation, I was motivated to join the Board of Directors.” Not only is Pat a member of the United Way board, and chair of the Administrative and Finance Committee, he helped to spearhead a new type of partnership, between United Way and our corporate partners, for the simple reason that he wanted the relationship to endure beyond his tenure.

On a personal level, Pat and his wife Lee Ann have always been involved in philanthropy, and their commitment to United Way has grown over time.  “With 3 kids, most of our early volunteer work was around sports and school. We made a conscious decision as they entered high school that more of our time would be focused in Boston and other communities where there are people in need.”  This included volunteering as a family at United Way’s Thanksgiving Project in Lowell this November. Like most of our Tocqueville donors, “My kids are in a situation where they don’t want for much, and I want them to think about others who are not in that situation.”

As kids have grown and taken on their own careers (including son Jack, who is now in charge of the United Way campaign at Mintz), the Gilligans have deepened their financial commitment to United Way.  “With obligations like paying for college coming to an end, it was a good opportunity for us to give more. My wife and I had a diversification plan, and United Way actually helped us with this – we could do more by giving to United Way than by spreading our donation across multiple organizations.”

“We have something that is pretty special and we think it makes sense to put it on paper, as an example for other companies and for future generations of Blue Cross Blue Shield staff.” he said when the agreement was signed in February of last year, “I think it’s important for companies to be engaged with their community.  For us, this isn’t just an annual campaign – we’re not picking a new charity every year. We’re thinking more for the long term. The partnership allows us to plan out the campaign years in advance. We’ve been involved with United Way for so long – the commitment is very real for us.”

Working so closely with United Way has also given Pat a unique perspective on United Way’s impact: “The thing I wish people understood is that United Way is a charity for other charities. The way they raise money and then use it to solve big community problems is why I’ve remained so committed to the cause.  Also, as chair of the United Way’s Finance committee, I have a very good view of how they manage their finances. This is a well-run operation. I give with my heart, but I want to be smart about it, and giving through United Way, I know that my money is being used properly.” 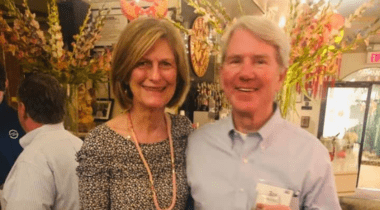