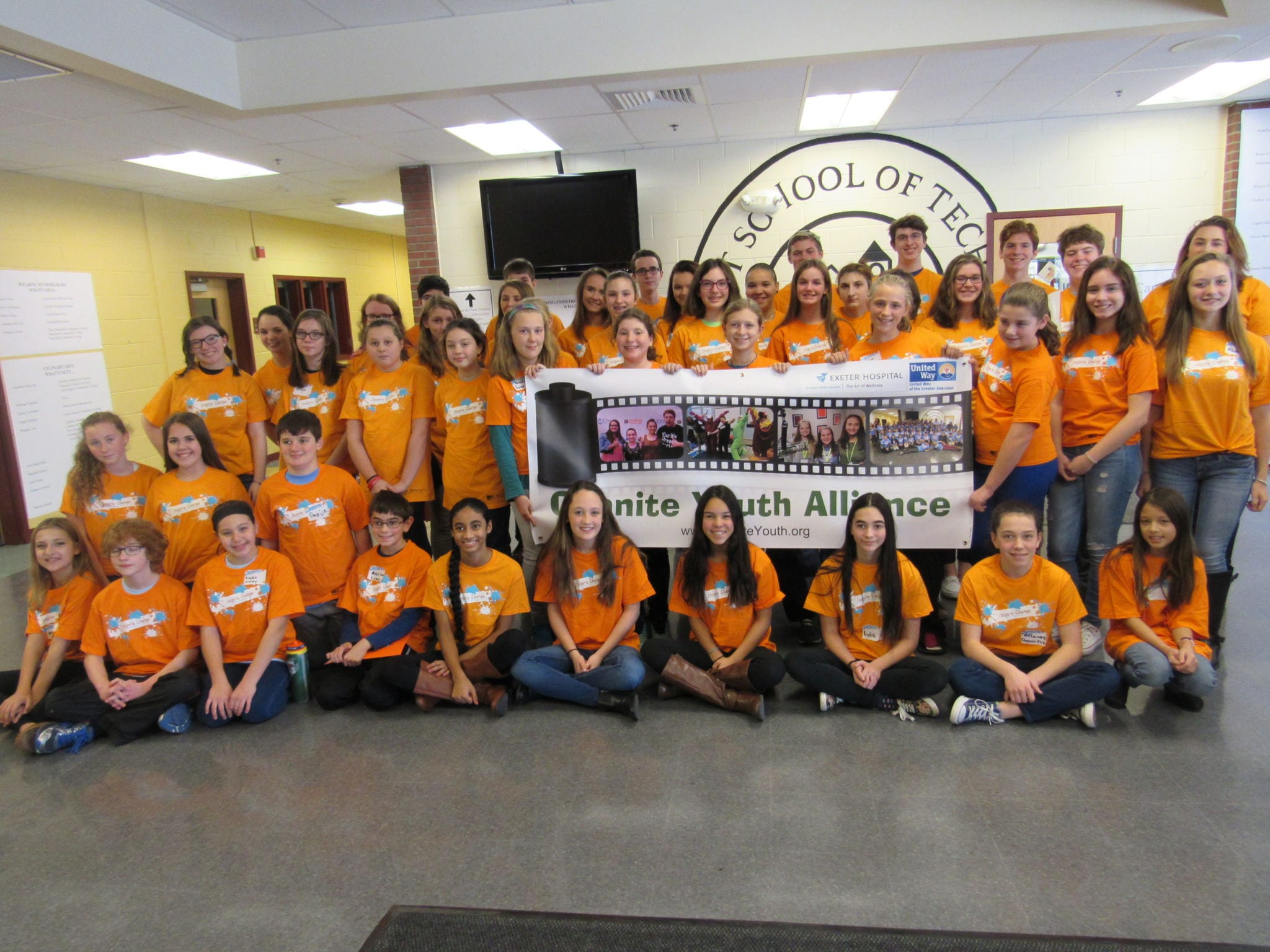 If you’ve been watching the news lately, you know that today’s young people are a force to be reckoned with. With a passion for social justice, unlimited research capabilities and the ability to push out messages in ways never before possible, this generation is taking on some of society’s most entrenched problems, often with unexpected success.

Now consider that New Hampshire is second in the nation in youth alcohol use, and that 1 in 6 New Hampshire teens have abused prescription drugs. Big Problem, meet Big Opportunity.

In 2013, United Way of the Greater Seacoast made a long-term investment with a simple premise: create a cohort of youth who are deeply committed to solving problems in their school or community, and provide them with the knowledge and skills to become effective advocates for change. Based on the Youth to Youth model that had been working in Dover for years, the Granite Youth Alliance was created to bring together students from throughout the region to tackle the problem of substance misuse from within.

“United Way’s work with youth is centered on peer leadership and substance abuse prevention for the long term” said Janet Guen, Assistant Vice President, Corporate Relations for United Way of the Greater Seacoast. “We’re investing in building a framework for kids to learn advocacy skills early in their education, so that the lessons take root and influence them for a lifetime.”

A Pipeline of Future Leaders

Students join the Granite Youth Alliance, some as early as 6th grade, for lots of different reasons. Some have a personal connection – a parent or sibling who has struggled with substance misuse or a friend who is starting to dip into their parents’ medicine cabinet. Some are simply socially-minded and want to use their unique vantage point to solve a problem before it ruins lives.

“We know that substance misuse is an issue students are facing in their schools and communities,” according to Vicki Hebert, Director of the Dover Coalition for Youth, who is providing technical assistance for the program. “Granite Youth Alliance is a way for students to find their voices and address the problems in their community. Students create solutions ranging from educating peers about the risk of taking someone else’s medication to working with parents and grandparents in the community to safely dispose of medication they’ve been prescribed.”

And it’s changing their worldview. Many students stay with the program until they graduate from high school – often going on to pursue college study in public health or social justice, inspired by the lessons they’ve learned and bolstered by skills honed over their tenure with the program. “The program has absolutely, 100% impacted my plans for the future.” said Caitlin Temple, a Junior at Newmarket High School, who has been a member of Granite Youth Alliance since 7th grade, “I’ve always been drawn to leadership opportunities. Originally, I thought I wanted to be a doctor, but being part of this program has exposed me to so many other ways I can make a difference. Now that I’ve had exposure to legislation and how laws are made, I know I want to do something where I can impact legislation around medicine and public health. Maybe something around Bioethics. I might even go to law school.” This year, Caitlin’s leadership in the Granite Youth Alliance earned her a spot on the Governor’s Youth Council for Substance Misuse.

The Granite Youth Alliance is a year-round middle and high school program with advisors that guide students through three phases of effective social change:

Taking it To The Streets

The program culminates with the Granite Youth Film Festival, a two-day event sponsored presented by O’neil theater in Epping and sponsored by Exeter Hospital, Amerigas, Atlantic Gymnastics, and Northeast Credit Union. More than a dozen participating teams – ranging in age from 12 to 18 years old – research a topic and pitch their ideas to a panel of adult prevention specialists and community members. Then they write, direct, produce, and star in short films around a topic specifically addressing substance misuse.

This isn’t simply an academic exercise. Films are shown at school assemblies, in health classes, and screened as part of community meetings. Each film becomes part of the team’s platform in advocating for change.

“It’s wonderful to see young people taking this topic so seriously and discovering their own potential to make an impact,” according to Jennifer McGowan, Community Impact Officer at Exeter Health Resources, which underwrites the Film Festival. “It’s great that they are inserting themselves intentionally into such an important discussion. As a culture we don’t always make space for young people to have their voices heard. This program and United Way are creating the space for them to be part of the conversation.”

Click below to view one of many outstanding Film Festival submissions:

See all the films here.

A First Step in Changing a Community for the Better

There’s no question that being part of the Alliance provides leadership skills and a strong sense of empowerment for young people. But how has the program changed the community? At minimum it’s opening the conversation. A long-held community drug take-back day that traditionally got very little attention was turned into a community event. With the help of the Granite Youth Alliance and a Newmarket coalition of adults, the local police department saw a much bigger response than ever before. At Newmarket High School, it used to be “uncool” to to talk about substance misuse, but since the Granite Youth Alliance has become a presence, it’s a familiar topic of conversation. In Caitlin’s own words, “With more people talking about it, there is less of a stigma and people are willing to talk about their issues and get help. In order to see a change you have to approach the problem head-on, even it if it’s uncomfortable.”