The reality of the cliff effect and the choices struggling families are forced to make.

Imagine successfully balancing a job and raising children, yet despite working full-time, you still need assistance for quality child care, food stamps and health insurance to make ends meet each month. You need to earn more, but you know that if you get a raise, you will lose these benefits and no longer be able to pay the bills. This cruel reality, that a family could be penalized for earning more – but not enough – income, is called the “cliff effect”, because the loss of benefits without sufficient income will send families off a financial cliff. And it can make a pay raise feel like a punishment

This struggle is real for thousands of families in the region who don’t earn enough to meet the state’s high cost of living, but are dollars away from earning too much to qualify for the help they need to survive and stay in their homes.  Families should not be forced to choose between filling the fridge or filling a prescription,” said Michael K. Durkin, president and CEO at United Way of Massachusetts Bay and Merrimack Valley. “Walking the tightrope that is known as “making ends meet” has not eased in the past few decades – if anything, it is worse.”

In Massachusetts, the high cost of housing and child care, particularly when combined with low-wage jobs, force too many families into financial situations where work simply doesn’t pay enough.

Nearly three out of four families in Massachusetts who receive food assistance are working.  According to Child Care Aware of America, Massachusetts is the least affordable state for child care for infants and toddlers.  A single parent can easily spend half of their income for childcare. The average child care cost for a four-year-old is more than $14,000 per year, which is 50% of the state median income for a single parent.  It’s easy to see how losing child care assistance would devastate a low-income family’s budget.

There are other budget stressors: one-half of renters in the state are cost-burdened, which means their rent eats up more than one-third of their income. Nearly 1 in 10 adults in Massachusetts reported that they could not see a doctor because of the cost. And two in five families do not have any emergency savings to help cushion an unexpected crisis such as the loss of a job or a catastrophic illness.

A Network for Working Families

“United Way is focused on helping people achieve the financial stability they need for a successful future,” Durkin says.  Over the last seven years, for example, United Way has transformed the way financial education is delivered.  The result is the Working Families Network of Massachusetts, a statewide effort to provide families facing economic hardship with access to financial education, job training, tax preparation, and home buying assistance.

Eighteen locations in MA offer financial coaching services, including budgeting, credit building and maximizing the benefits to which they are entitled. The results so far are positive:

United Way has partnered with the City of Boston’s Office of Financial Empowerment and LISC Boston around an ambitious goal: to help 25,000 Bostonians achieve a prime score (660+) by 2025.  Funded by Citi Community Development and Bank of America,  Boston Builds Credit is engaging dozens of partners, including nonprofits, employers and financial institutions to actively recruit and connect residents to safe, affordable credit building products.

The Earned Income Tax Credit (EITC) has been hailed as one of the most effective anti-poverty strategies in the country. Each year, United Way funds free tax preparation services to help ensure low-income working families can claim their refund through this credit — instead of leaving it on the table because they weren’t aware of it.  In 2018, the United Way-funded EITC network helped 1,069 families claim this tax credit, returning an average refund of $1,745 and a total of $1.9M to the pockets of families to save and spend in the community. Those are funds that can be put toward heating a home, a payment on a car or a home, or a degree.

State and federal policies are powerful tools to help address the gap between rising  incomes and decreasing benefits.


We are closely watching the U.S. House and Senate negotiations on the pending “Farm Bill” to ensure that the federal Supplemental Nutrition Assistance Program (SNAP) is strengthened and protected.  According to the Food and Resource Action Center, reductions in SNAP benefits are tied to a 70% higher risk of developmental delays and 36% higher likelihood of poor health in young children..

Another program to watch is the U.S. Housing and Urban Development (HUD)’s Family Self-Sufficiency Program.  This is an employment and savings incentive program for families in public housing.  Through the program, when incomes go up, forcing rent increases, the increase goes into a special savings account that can only be used to pursue employment or other financial opportunities. A recently enacted change in the law allows the program to be offered in multifamily assisted housing that is privately managed, which will provide opportunities to expand this program more broadly.   A similar state program, MassLEAP provides supportive services to help residents in state-assisted housing developments to achieve a family-sustaining income.

United Way works with the On Solid Ground Coalition, which actively advocates to combat cliff effects. Last session, they successfully pushed for funding increases for multiple programs, including an increased percentage in the state Earned Income Tax Credit a family can receive. The coalition advocates to adjust and improve state programs and policies so that slight increases in income do not cause families economic hardships due to loss of supports. Their work stems from a report developed in 2015 which studied the impacts of Massachusetts state policies on the economic stability of families.  The state Department of Transitional Assistance has also been examining the cliff effects of its policies, increasing asset limits by $5,000 and providing for some transitional time periods before income is counted against benefits.

“Every family makes hard choices to live within their means,” Durkin says.  “But no family should have to choose between a better-paying job and basic necessities such as housing, heat or food to make ends meet.  Our goal is to help families in need ‘mind the gap,’ and achieve greater financial opportunity.” 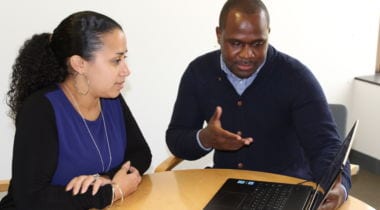